In this guide we will be talking about How to Fix Toilet Flush Problems. Inside the toilet tank is the ballcock, or fill valve, which refills the tank after each flush. Another valve, called the flush valve, sits inside the tank as well. When open, the flush valve releases water from the tank into the bowl. 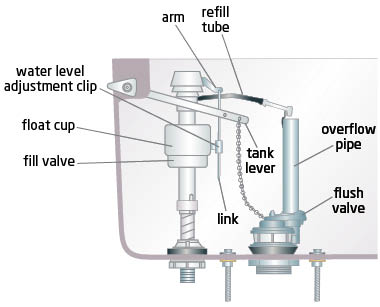 1. The handle tugs on the chain, which opens the flush valve. Water rushes from the tank into the toilet bowl.

2. As the water level in the tank falls, so does a device called a float cup, which floats on the tank water.

3. The float cup is connected by a metal rod to the arm of the ballcock. When the float cup falls, it tugs down on the arm, which opens the valve and allows water into the tank. Water is also sent through the refill tube and down the overflow pipe to refill the bowl to its previous level.

4.As the water level in the tank rises, the float cup rises, lifting the arm and eventually shutting off the valve..

5.If the water level in the tank gets too high, water goes down the overflow pipe into the bowl.

How to Fix a Toilet That Runs Constantly

To fix a constantly running toilet, check the:

If the chain connected to the cap over the flush valve is too long or too short, it can cause your toilet to run constantly:

To lengthen or shorten the chain:

If everything seems to be in working order but your toilet still runs constantly, you may have a faulty flush valve cap, also called a flapper.

The flapper covers the flush valve. If it’s faulty, it won’t form a seal over the valve. As a result, water escapes into the bowl, causing the refill valve to engage in order to keep the tank full. If you have a faulty flush valve cap, you need a new one. To replace it:

1. Remove the chain from the lift arm.

2. Slip the flapper from its two “ears,” which fit over the lugs on the overfill pipe and connect the flapper to the pipe. 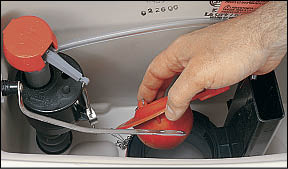 3. Replace the flapper with a new flapper that you are sure fits your make and model of toilet. Slip the new flapper back onto the lugs, then reconnect the chain.