Japanese beetles were introduced to United States in 1916 and have spread to almost every eastern state since then. They are an incredibly destructive imported pest, eating tree foliage and smaller plants from the top down while exuding a pheromone that attracts more beetles to the feast. Efforts are underway by government organizations to import other insects to help reduce Japanese beetle populations, but until that time, you’ll have to control these beetles the hard way.

Signs of a Japanese Beetle Problem

Japanese beetle grubs (larvae) can destroy even a healthy lawn. Telltale signs include inexplicable loss of health or brown patches on a lawn, or plants in the area that seem to be turning brown and withering from the top down. It’s safe to assume that if you’ve found one beetle, you’ll find more soon enough.

You can control adult Japanese beetles by spraying a mixture of water and a common insecticide such as Sevin® or Orthene® on and around the plants that you’re trying to protect. Follow the directions carefully to ensure a proper ratio, and reapply once a week through peak season (July to September) to help keep beetles off your plants.

As of yet, there’s no tried-and-true way to prevent Japanese beetle infestations, especially since adult beetles will fly several miles in one day to find a proper feeding ground. Planting beetle-resistant plants may help reduce the chances of an infestation. Call your local extension office to find out which plants in your area are least susceptible to Japanese beetles. 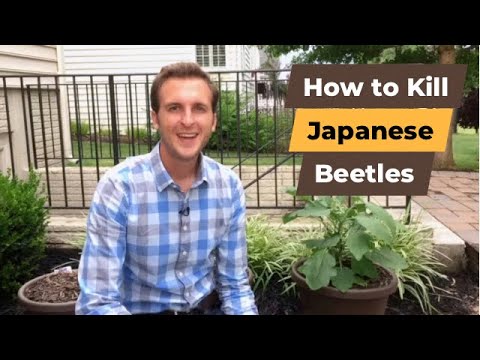