The best way to deal with a clogged sink depends on whether it’s a bathroom sink or a kitchen sink. One thing you should never do is use a chemical clog remover. Chemical cleaners will weaken your pipes, leading to much bigger problems than simple clogs.

How to Unclog a Bathroom Sink

Bathroom sinks differ from other sinks, such as kitchen and utility sinks, in two main ways:

Overflow system: Bathroom sinks have a built-in system to handle overflows. Slots or holes near the top of the basin allow water that reaches this level to flow through an overflow passage into the drain. 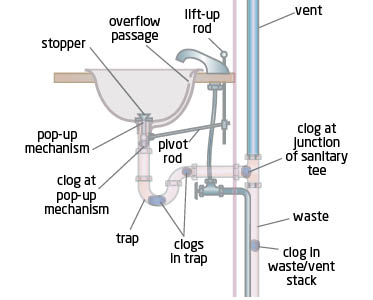 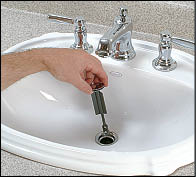 3. Plunge: Fill the sink so that the water is higher than the plunger’s cup. Plunge with a series of quick, strong strokes. Repeat as needed to clear the clog. 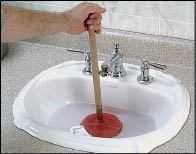 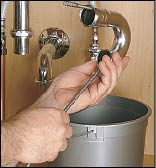 5. Auger the waste line: If there’s no debris in the trap, the clog is most likely in the line leading to the sanitary tee, which connects to the waste stack. Insert the end of a hand auger into the drain opening until you feel resistance. Then rotate the snake to clear the clog.

How to Unclog a Kitchen Sink

Most kitchen sinks have two basins that are connected by a pipe. A garbage disposal may be attached to one of the basins. The diagram below shows a typical kitchen sink, along with common locations of clogs. 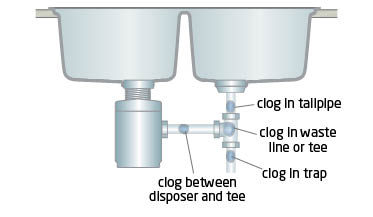 To clear a clogged kitchen sink:

1. Block the other basin: If your kitchen sink has two basins, you’ll have to block off the drain of one of the basins. If only one basin is clogged, block the drain of the unclogged basin. If both basins are clogged, block whichever basin you prefer. The easiest way to block the other drain is to use the strainer that fits into the drain. Later, you’ll have to get someone else to hold the strainer in place while you plunge .

2. If you have a garbage disposal: Find out whether your garbage disposal has an air gap—a device that sits above the level of the sink and prevents siphoning action in the disposal unit, which can suck sewage water up into the sink. If it does, use a Vise-Grip or small C-clamp to pinch closed the walls of the hose that stretches between the disposal and the air gap. 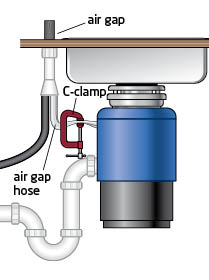 4. Plunge: Cover the drain of the basin with the plunger cup. Using two hands, give the plunger a series of hard in-and-out strokes.

If just one basin is clogged, plunge until the clog has cleared. If both basins are clogged and plunging doesn’t fix the problem, clean out the trap and auger the waste line.